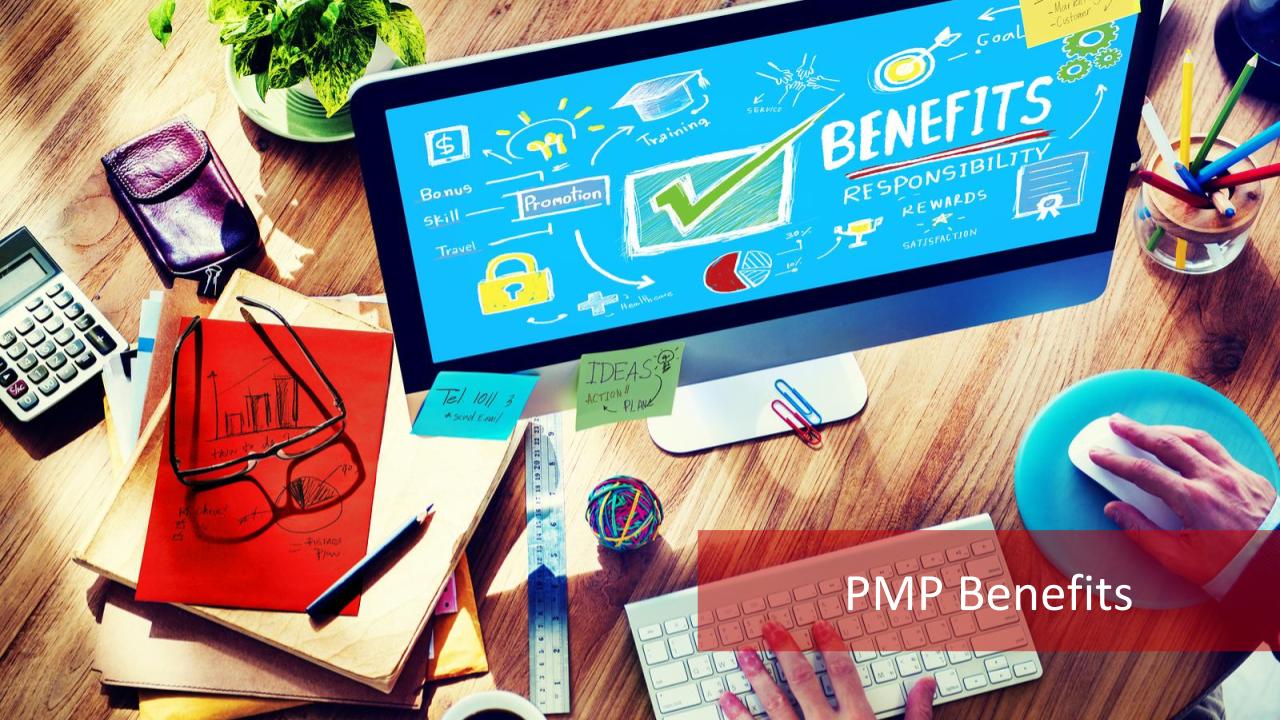 If you want to know what are the PMP benefits and why everyone is talking of PMP, read on! We will discuss both tangible and intangible benefits, while also discussing what you need to put in for becoming a PMP. Before we go into the PMP benefits, let us understand what is PMP, PMP exam content and why everyone is after it; while also telling how you can prepare to become a PMP.

Can anyone apply for PMP?

Not actually! Though the PMP Benefits are enticing, PMI Institute has rigorous PMP requirements. Since PMI follows stringent quality processes and has been maintaining the standard on the level of certification from 1969, there are definitely certain eligibility criteria.

To get the multitude of PMP benefits, you need to have the following prerequisites or PMP Certification requirements:

But, if you have a secondary degree or diploma, you can still avail the PMP benefits if you meet the following:

What is the investment for PMP?

If you want PMP benefits, you know that there would also be some costs associated with it. When we say investment, it is both the money and time that you need to put in to get the pot of gold: PMP benefits.

What is the cost involved for PMP?

As a project manager, are you thinking about the ROI (Return on Investment) or the Cost vs. the benefit of this PMP project? Here we give you the PMP cost so that you can compare with the PMP Benefits.

Generally, PMP Exam cost includes exam fee, membership fee, PMP study guide and PMP Question Bank. You need to pay $405 as Exam fee to PMI Institute if you are a member, while you will pay $139 for the annual membership, both of which are non-negotiable.

If you see the chart above, you know that the major component of the cost is consumed by the Exam fee and the 35- contact hour fee. 35 contact hour cost is where you can save depending on what type of PMP training course and provider you go for. You can also cut down on the Resources cost but that won’t make a big difference. Resources cost includes any PMP study guide, question bank, PMP practice exam that you may need for a proper training.

You can attend a face-to-face physical classroom session which is called a PMP Boot Camp or a PMP Online Certification for PMP Certification Exam preparation. While boot camps are expensive, online options are less costly. You can go for a PMP boot camp online which is a more flexible and competitively priced option. An online PMP course comes with ‘anytime anywhere’ facility with a monthly subscription or lifetime access options. Some of the monthly subscription courses start at under $40 while you can get the annual subscription within $200.

If you are thinking of PMP Benefits, you must first be willing to commit your time to it along with the money. PMP Exam Prep needs a dedicated time on a consistent basis. Typically, you need to be able to spend 12-16 weeks for PMP certification exam preparation. Use a PMP study plan that you can stick to and ensure that there is a certain time dedicated to the preparation every day, at least half hour and 6-8 hours over the weekend.

After the initial round of study of PMBOK, take practice tests, Math tests and use PMP Question Bank extensively to know how you are faring. Based on this, put emphasis on the areas you are not strong. Use the resources that you have purchased: Exam Prep guide, Study Guide, Mock tests or simulated question banks, etc.

There are many apps available too if you want to catch up on the mobile phone while waiting for a client or have some spare time. For grabbing the PMP Benefits, you should use your time effectively.

Watch our “What are the PMP® Certification Benefits?” video

More PMP Benefits you can expect

PMP Benefits do not end there, let us define the other PMP benefits, which are more intangible than the salary and the job prospects, but equally important:

Sunanda Gundavajhala, B.Tech, M.B.A, PMP has over 25 years of project management. She is a consultant and trainer on project management for different sectors and is the recipient of “Recognition of Excellence” award from PMI, USA and Woman Volunteer award from Hyderabad, India Chapter of PMI. To her credit is the contribution to the “Practice Standard on Scheduling from PMI”. She has worked as the Liaison officer for PMIEF (Education Foundation) for the Hyderabad, India Chapter of PMI.