Home / IT Service Management / ITIL Foundation / ITIL Remediation plan: What to do if your IT Service Change Fail 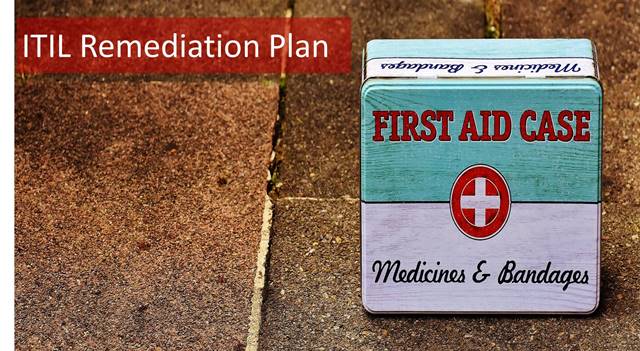 The ITIL Service Transition stage is the third stage of the ITIL lifecycle. It is in this stage where new or upgraded services are tested before going live. This is thoroughly covered in ITIL foundation certification training. After the ITIL Service Design stage, it is assumed that the service will work flawlessly in a test environment. However, this is not always the case. If the service implementation fails, it is necessary to go back to square one. But what if there is no protocol to go back to the way that things were when they still worked? Each service needs a back-out plan in case things go horribly wrong and this is called and ITIL remediation plan. An ITIL remediation plan is put into place in the Service Transition stage to ensure that services can be restored to their previous working conditions. This is discussed in more detail in ITIL courses and also in this article.

Plans are done, actions are taken, and changes are initiated, but what happens if the change is not completed successfully? No change should be approved without having explicitly addressed the question of what to do if it is not successful. And this should be done using an ITIL remediation plan. Because, if the change is not successful, previous working and operational states of the services must be re-ensured for the service delivery with the help of an ITIL remediation plan. Otherwise, there will be outage or service degradation which can cause dissatisfaction of the customer. ITIL Remediation plan comes into play when service changes do not pan out as expected. An ITIL Remediation plan for a change may be as simple as “Reverse each step.” No matter how you look at it, remediation plans are necessary for the successful implementation of new or upgraded services.

Risk management is the process where all risks that may possibly apply to the roll-out of a new or improved service are considered. Contingency plans are put into place to deal with snags that may occur. However, sometimes the problems that arise when testing the service are so severe that there are no quick fixes. In this case, an ITIL remediation plan is implemented where steps are taken to reverse the change and return to service to its original state. Working with an ITIL remediation plan during the Service Transition stage will ensure that no serious snags will be present when the service is rolled out into a live environment. So that customers won’t have to deal with an inferior service. In this way, an ITIL remediation plan is part of risk management.

A remediation plan is a back-out plan

An ITIL remediation plan for a change may be as simple as “reverse each step that was taken so far” or there may be a series of complex instructions to be followed, including restoration of baselines. In rare circumstances, a change may be authorized without considering the ITIL remediation plan (e.g. emergency or security changes). In these situations the change is critical and the IT Service Provider has to either ensure a successful IT change management or take steps to rectify the circumstances if the change fails.

ITIL Remediation plan must be 100% viable

ITIL Remediation plans form part of the Service Transition stage of the ITIL service lifecycle. If the change proposal is not required or has been approved, the testing continues in a laboratory replicating the production environment. The testing should include procedures to install the proposed change, and an ITIL remediation plan to back out from the change in the event it cannot be successfully implemented, and to verify the success of the change after it has been implemented.