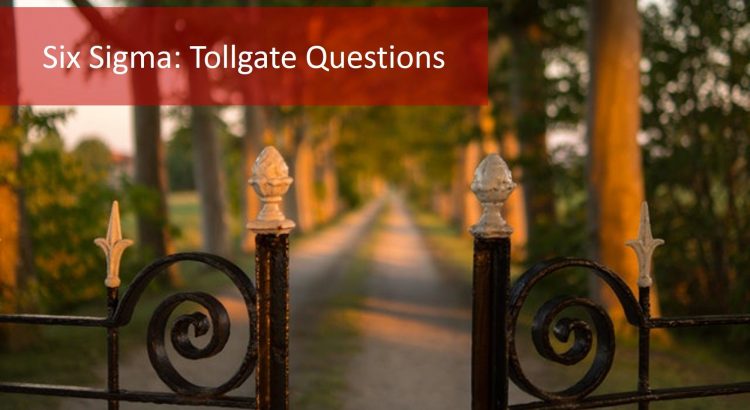 Most Six Sigma projects follow the DMAIC model – Define, Measure, Analyze, Improve, Control as is often discussed in online Six Sigma training. These steps are followed in order. But how does a Six Sigma practitioner who has completed Lean Six Sigma training know when the team can move on from e.g. the Define phase to the Measure phase? The Six Sigma approach requires practitioners, specifically the Champion, to complete a tollgate review checklist to determine whether all the required steps were taken and all the necessary information was gathered that would allow the team to progress to the next stage.

This article will focus on the tollgate checklist for the Define phase of the DMAIC model.

What does Tollgate Review Checklist mean?

There is a formal process for Six Sigma Project Sponsors and Champions to review each team’s progress and interim results. It is called the tollgate review process and takes place at the conclusion of each phase in DMAIC framework. The tollgate review process includes a detailed list of questions to be answered at the end of each phase. The list of questions, which we are going to discuss now, are only proposed questions. We can amend the checklist according to our project requirements.

In connection with tollgate reviews, normally a meeting with the champion and/or project sponsor is held to review project team’s deliverables. Let’s discuss the proposed list questions that need to be answered by the project
team members.

What is the “Big Y” of the project?

The first question relates to the importance of the project. The champion will try to find out what the “Big Y” or “Project Y” is which will be influenced as a result of the implementation of this project. The champion would like to see the complete business case here. The business case column, in the Six Sigma project charter, captures all critical and non-critical reasons for initiating the project. This tollgate question brings the project team’s attention on the project feasibility study. The “Big Y” refers to the project objective. “Small Y” refers to the sub-objective contributing the main project objective. In this tollgate question, the champion or sponsor would want to see if the “Big Y” was selected in a business-feasible manner.

What is the problem statement?

The second tollgate question relates to what the problem statement is. The champion would like to see if:

What are the goals and benefits of the project?

What is the goal statement?

What is the project scope?

The fifth tollgate question will help the champion deep-dive into the project scope. The champion will check whether the scope is reasonable or not.

What is the competency of the project team?

The seventh tollgate question helps champion understand the project team members’ competency or skill-sets to work in the project. If some competency of skillset is lacking, the champion will have to draw in a team member with the desired competency/skills.

What is the project plan?

The eighth tollgate question brings his attention on the project plan. He/she can discuss the program plan at MACRO or MICRO level.

Who are the project stakeholders?

The answer to the ninth & tenth tollgate questions comes from the Project Stakeholder Analysis. The project champion would certainly like to know who the key stakeholders are, who the internal and/or external project stakeholders are. It will of great interest for the champion to get an idea of project team’s rapport with all key stakeholders.

What are the constraints and challenges?

The eleventh tollgate question talks about the constraints and challenges the project team might have come across. The champion goes through the list of challenges and constraints to assure the required support to the team. The discussion and deliberation take place to ensure smooth project execution.

What are the Critical to Quality components (CTQs)

The twelfth tollgate question of the Define phase can help the champion investigate the process of identifying CTQs. CTQs shall be measurable. The champion would certainly like to have a look at the data and information by which the CTQs were drawn and validated.

Apart from these questions, the champion may also be interested to know the applicability and usage of a variety of tools and techniques that are normally used in DEFINE phase. He/she may also check whether or not the deliverables of DEFINE phase have been met.