Home / Six Sigma / How Do The Six Sigma Statistics Work? 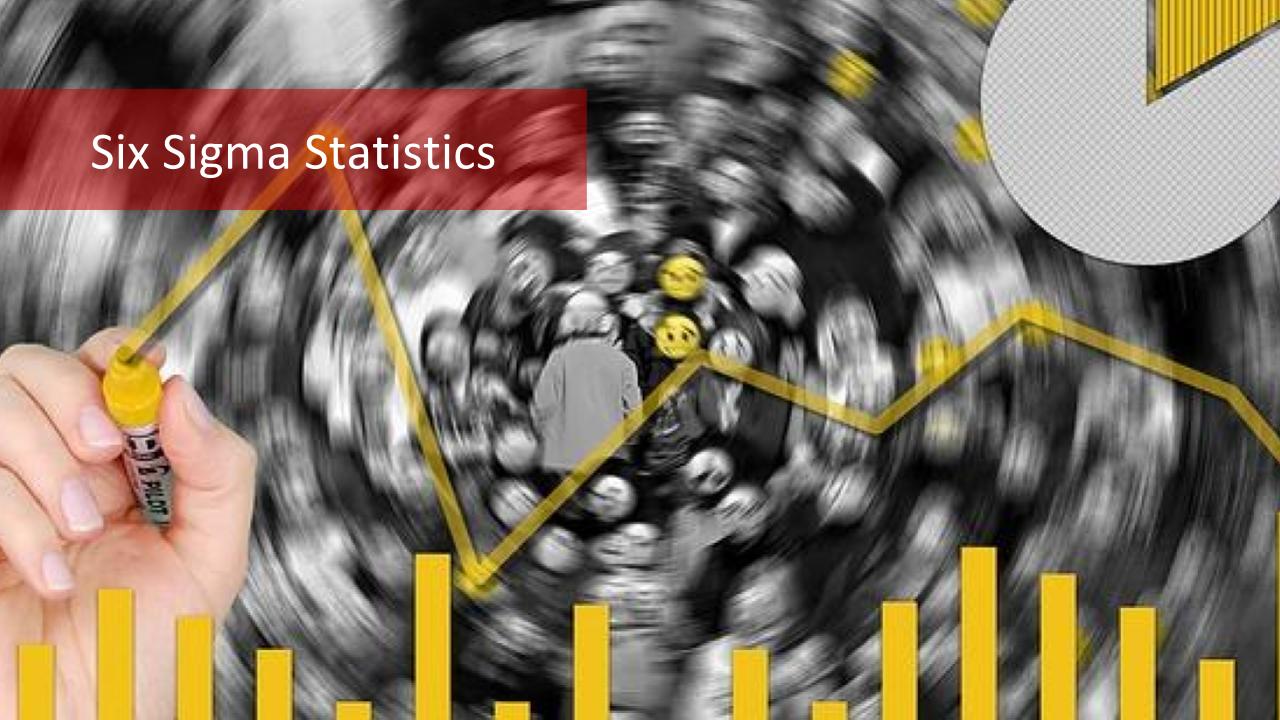 Now, let’s recall the empirical rule of standard deviation in Six Sigma statistics. This figure shows an extension to the same rule.

Now, for Six Sigma statistics the extension would be as follows:

Of course, in Six Sigma statistics, these standard deviations fall on both the left and the right tails of the normal distribution curve. This means that in any process, there will be values that are higher than the mean and values that are lower than the mean according to Six Sigma statistics. In order to produce quality products that do not deviate too far from the mean on a specific metric, it is important that a specification limit is set for that metric.

To better understand Six Sigma statistics, let’s go over a sample graph to understand these concepts better. The process spread in the chart, which is ± 3 standard deviation of the Six Sigma is measured by the range, variance, and standard deviation. These are the most important Six Sigma statistics terms. The specification spread (USL – LSL) divided by the process spread (6s) is known as “Short-term Process Capability” based on the dispersion of the sample data. The further the specification spread from the process spread, the higher process capability would be. In other words, the lesser the variation the higher would be the process capability.

Let’s try to understand the difference between Defects and Defectives. Defects mean failing to deliver what customer wants. Defective means the failing of the entire product or service. Please remember that one defective product may have a multiple number of defects but the existence of a defect does not necessarily mean the product is defective. Six Sigma statistics is used to determine the extent of defects and defectives.

In Six Sigma statistics, large variation is noticed when the normal distribution curve is flatter in shape. In this case, the specification spread becomes smaller than the process spread. It reduces the short-term process capability.

When a process is centered, it is normally distributed data according to Six Sigma statistics. It is an on-target process. In this case, the distribution is symmetric, has close to zero skewness and the specification spread is more than the process spread.

To sum up, Six Sigma is about creating a culture that demands perfection and that gives employees the tools to enable them to pinpoint performance gaps and make the necessary improvements using data-driven problem-solving methods. Six Sigma does make use of full range of statistical tools that are available for analyzing and the primary objective of Six Sigma is to reduce variability. Variability is the primary sign of defects. Hence, as the variation becomes smaller the number of defects reduces. Variability is measured for specific metrics that are critical to the customer. This is the critical point of Six Sigma: reducing variation so that a process delivers results as close as possible to the desire of the customer.