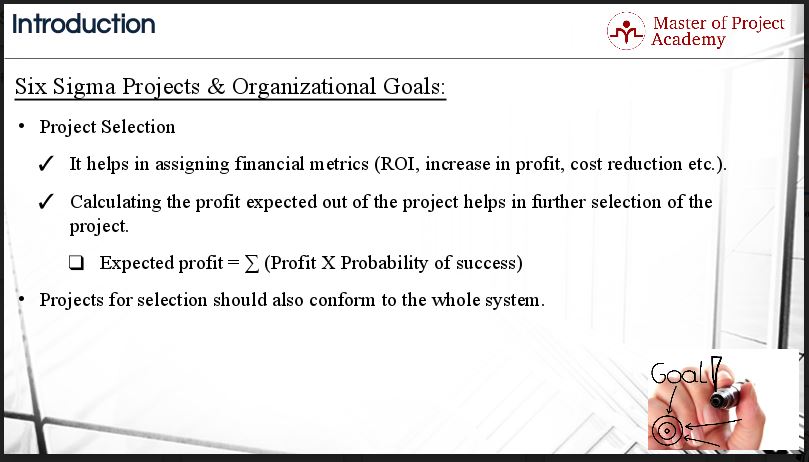 The importance of financial metrics in Six Sigma projects selection

It helps to assign financial metrics to the outcome of the project during its selection phase. Examples of financial metrics would include return on investment (ROI), an increase in profit, cost reduction and so on. Calculating the profit expected out of Six Sigma projects helps in further selection of the project. Expected profit equals the sum of profit times the probability of success.

There are seven responsibilities, we will be going over each one-by- one.

A leadership team or council defines the goals and objectives in the Six Sigma process. Just as a corporate leader sets a tone and course to achieve an objective, the Six Sigma Council sets out the goals to be met by the team. Here is the list of leadership

The Six Sigma sponsor are high-level individuals who understand Six Sigma and are committed to its success. The individual in the sponsor role acts as a problem solver for the ongoing Six Sigma project. Six Sigma will be led by a full-time, high-level champion, such as an Executive Vice President. Sponsors are owners of processes and systems who help initiate and coordinate Six Sigma improvement activities in their areas of responsibilities.

The person responsible for supervising the Six Sigma team effort, who supports the leadership council by ensuring that the work of the team is completed in the desired manner. The implementation leader ensures the success of the implementation plan and solves problems as they arise, organizes training as needed, and assists sponsors motivating the team.

The Six Sigma expert or consultant who sets a schedule defines results of a project, and who mediates conflicts or deals with resistance to the program. Duties include working as the go-between for sponsor and leadership, scheduling the work of the team, identifying and defining desired results of the project, mediating disagreements, conflicts, and resistance to the program and identifying success as it occurs.

The individual responsible for overseeing the work of the team and for acting as the go-between with the sponsor and the team members. Responsibilities include communication with the sponsor in defining project goals and rationale, picking and assisting team members and other resources, keeping the project on schedule, and keeping track of step in the process as they are completed.

An employee who works on a Six Sigma project, given specific duties within a project, and deadlines to meet in reaching specific project goals. The team members execute specific Six Sigma assignments and work with other members of the team within a defined project schedule, to reach specifically identified goals.

The individual who takes on responsibility for a process after a Six Sigma team has completed its work. When the Six Sigma project has been completed, the process owner is responsible for monitoring the performance of the project metrics post implementation. If the changes to the process that was part of the Six Sigma project does not perform optimally, the process owner must bring it to the attention of the project team as this means that more improvements will need to be done.

It is very important that each member of the team knows exactly which tasks they are responsible for in Six Sigma projects. If there is an overlap in roles and responsibilities, it may cause confusion in the team and it may result in some tasks not being done. However, if the roles and responsibilities are clearly defined, each task will have an owner that is responsible for completing that task and the project will run smoothly.