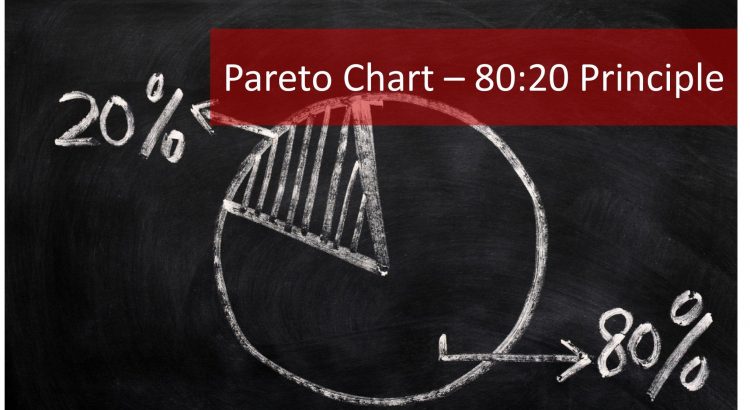 In the context of Six Sigma, the Pareto Chart is a member of the 7 QC Tools and is a valuable tool for the Measure phase of the DMAIC process. The Pareto Chart is named after Vilfredo Pareto, a 19th-century economist; who postulated that a large share of wealth is owned by a small percentage of the population. This basic principle translates well into quality problems and is a point of discussion in Lean Six Sigma courses. Pareto analysis is the process of ranking opportunities to determine which of the many potential opportunities should be pursued first. It is also known by Six Sigma Certified Green Belts as ‘‘separating the vital few from the trivial many.’’

What is a Pareto Chart?

A Pareto Chart, according to the Lean training course, is a series of bars whose heights reflect the frequency or impact of problems. The bars are arranged in descending order of height from left to right. This means the categories outlined by the tall bars on the left are relatively more vital than those on the right. This bar chart is used to separate the “vital few” from the “trivial many”.

The Pareto chart is used to prioritize the contributors which make the biggest impact on a problem, or which represents the largest areas of opportunity. These diagrams communicate the principle of 80:20. It states that 80% of an effect comes from 20% of the causes. For example:

Essentially the 80:20 rule means that focusing on the vital few yields larger gains than the trivial many. The Pareto chart is a tool to focus attention on priorities while trying to make decisions. It is a good communication tool that
describes the data in a simple and easy-to-read bar diagram. The chart helps you to study and analyze the frequency or occurrences of an event in a process and identify the biggest contributors.

Why use a Pareto Chart Tableau?

We can separate the few main problems from the many likely problems for us to focus our improvement efforts, arrange data according to priority or importance, and determine which problems are most important using data, not perception or gut feeling.

A Pareto Chart can answer the following questions:

An Illustration of the Pareto Chart Template

Let’s have a look at an illustration of Pareto chart. The raw data can be seen in the first table. It has two columns which are defect type and count of defects.

In this example, defect types C and A accounts for nearly 80% of the problems. The Six Sigma project team should focus on these defect types to improve the process.

How to construct a Pareto Chart?

The first step is to determine the classification for the graph. If the desired information does not exist, then obtain it by designing check sheets and log sheets

The second step is to select a time interval for analysis. The interval should be long enough to be representative of typical performance.

The third step is to determine the total occurrences, for instance, Cost, Defect Counts, etc. for each category and to determine the grand total. If there are several categories that account for only a small part of the total, then group those into a category called ‘‘Other.’’

The fourth step is to compute the percentage for each category by dividing the category total by the grand total and multiplying by 100.

The fifth step is to rank-order the categories from the largest total occurrences to the smallest.

The sixth step is to compute the ‘‘Cumulative Percentage’’ by adding the percentage for each category to that of any preceding categories.

The eighth step is to label the horizontal axis with the category names. The left-most category should be the largest, second largest next, and so on.

The ninth step is to draw in bars representing the amount of each category. The height of the bar is determined by the left vertical axis.

And there you have it! Ten easy steps to create a Pareto Chart to see which 20% of factors creates 80% of problems in your Six Sigma project.