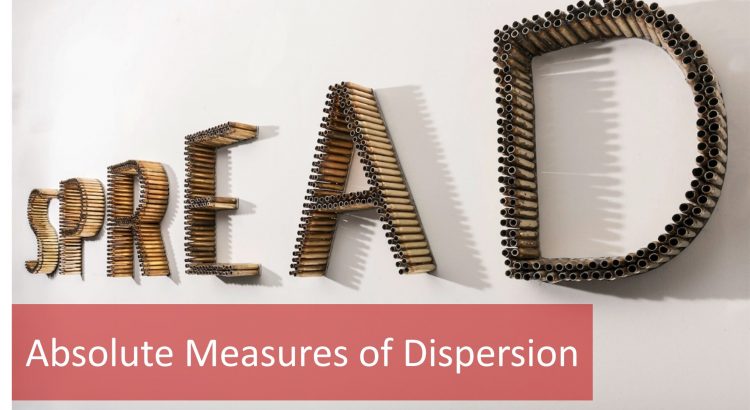 In the Measure phase of the DMAIC process in Six Sigma, there are many types of statistical parameters that graduates of Lean Six Sigma Green Belt training or other Online Six Sigma courses should know. Measures of Central Tendency serves to locate the center of the distribution. However, they do not reveal how the items are spread out on either side of the center. To understand the spread of the data, Lean Six Sigma practitioners need to understand relative and absolute measures of dispersion. This characteristic of a frequency distribution is commonly referred to as ‘Dispersion’. The word ‘Dispersion’ refers to the lack of uniformity in the sizes or quantities of the items of a group or series of data. The word ‘Dispersion’ may also be used to indicate the spread of the data. It is a great way of showing how quantitative data is spread relative to the center point of the data.

Let’s have a detailed look at absolute measures of dispersion and how they are used in Six Sigma practices.

There are two kinds of measures of dispersion, namely:

The absolute measures of dispersion are as follows:

This is the simplest possible of the absolute measures of dispersion and is defined as the difference between the largest and smallest values of the variable. The formula for range would be read as the largest value minus smallest value. Symbolically, it is read as L minus S. Take a look at the simple illustration on range in the figure below. The largest value in the data set is 11. The smallest value in the data set is 4. Hence; the range is 11 minus 4 and this makes 7. This is an example of one of the absolute measures of dispersion.

The first quartile, Q1, is equal to the size of N+1th divided by 4. In case of the third quartile, Q3, simply multiply the formula for Q1 by 3. Therefore; the formula to quartile deviation is Q3 minus Q1 divided by 2.

Let us also try to understand the method of locating the second quartile. It is the same as that of the Median. Thus, the formula for Median will work here. The value of Q1 and Q3 can be obtained by the formula shown in the figure below where ‘N’ refers to the number of observations.

Take a look at the illustration on quartile deviation below. First of all, the values are arranged in ascending order. Once you do that, you will have to calculate the position of Q1. The formula for calculating Q1 is ‘n’ plus 1 divided by 4. So, ten plus one divided by 4 is equivalent to 2.75. The position of Q1 is equivalent to the value at the 2.75th position. We will have to calculate the value which lies at the 2.75th position. How do we do that? Here is the formula! Q1 will be equal to value at 2nd position plus 0.75 of the difference between 3rd value and 2nd value. The value at 2nd and 3rd position is 391 and 407 respectively. So, our equation will be 391 plus 0.75 of the difference between 407 and 391. The answer is 403. The Q1 is 403.

Calculate the position of Q3

The Standard Deviation is the the positive square root of the mean of the square deviations taken from arithmetic mean of the data.