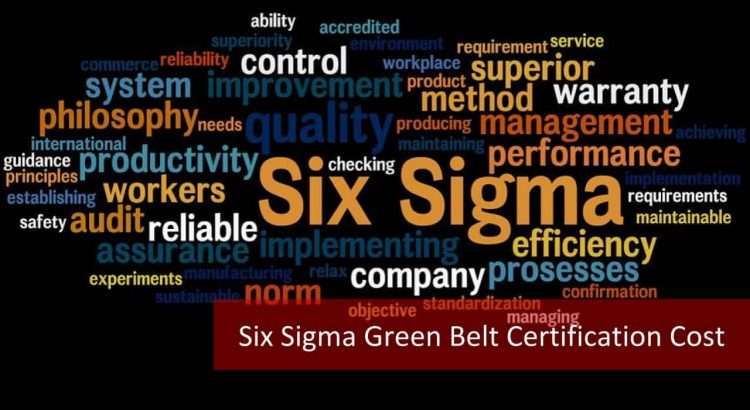 What Is Six Sigma? The Evolution

Before going into the details of Six Sigma Green Belt Certification Cost, let’s define what is Six Sigma. Six Sigma is a successful evolution of total quality management systems. Because total quality management or Six Sigma provides a system for how you will run your enterprise, it could just as appropriately be called “total business management” or “total operational management.” We probably have W. Edwards Deming and Joseph M. Juran to thank for these programs being identified under the quality banner. Their ground-breaking programs and the results they achieved in Japan led to American management “rediscovering” them in the early 1980s.

Do you know what’s the meaning of total quality management?

Let’s explore the history of Six Sigma a little bit more before explaining the aspects of Six Sigma Green Belt Certification Cost. The terms “Six Sigma Black Belt” and “Six Sigma Green Belt” were not applied to the Six Sigma program at Motorola until the 1990s. Since that time, as Six Sigma has grown to become recognized as a leading-edge standard for companies in manufacturing, service, and retail, many programs include special-assignment employees with the title of Six Sigma Black Belt or Green Belt. All too often, these individuals are external to the operations that they support, which is a very expensive and less-than-optimum structure for installing Six Sigma. There is a high probability that such an approach will disenfranchise most employees and give them a convenient avenue for abdicating their responsibilities. Short-term benefits can be realized, but the long-term cultural way of thinking about customer satisfaction and continuous improvement will not be infused throughout the greater workforce.

A highly effective and cost-beneficial method for deploying green-belt and black-belt skills throughout an enterprise is to not create specialists with the title of black belt and green belt, but rather to consider all your employees as potential green belts. All employees can learn the skills and techniques required to become a green belt.

The goal of any enterprise should be to get all its employees trained in the techniques required to become a green belt, including the seven problem-solving tools, the six-step model for continuous improvement, and the interpersonal skills required to effectively participate on a team.

The Key Elements of Six Sigma

We are going to review the aspects of Six Sigma Green Belt Certification Cost soon, but first, let’s look at the key elements of Six Sigma and why Six Sigma is becoming more and more important in each industry.

The beauty of Six Sigma and the very core of its early development and a successful application was that it included all employees. The major benefits of improved customer satisfaction, market share gains, reduced operating costs, profit improvements, and increased stock prices are fuelled primarily by teams of direct labor employees.

What Are The Responsibilities of Six Sigma Green Belts?

The format for Six Sigma Green Belt certification training is as follows:

Now let’s review the second aspect of Six Sigma Green Belt certification cost, which is the institution you will take the exam:

The details of Six Sigma Green Belt certification cost and exam at IASSC are as follows:

The details of Six Sigma Green Belt certification cost and exam at ASQ are as follows: