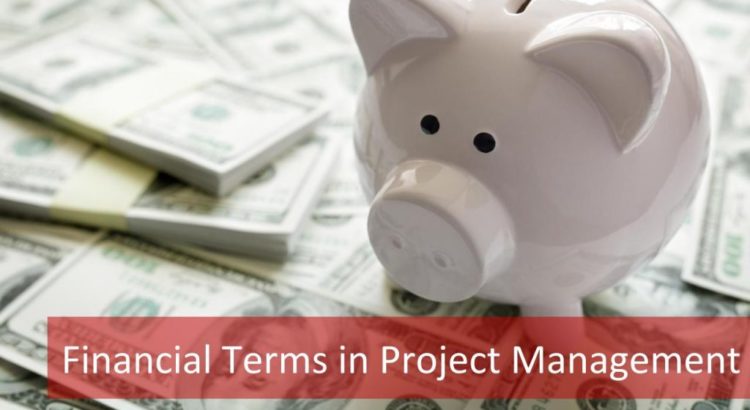 To obtain a more thorough knowledge of these financial terms, check the online PMP training options to enroll in a PMP certification training.

Now let’s define these six financial terms and illustrate them with examples.

First one of the financial terms is the Economic value added and it’s abbreviated as EVA. EVA is concerned with whether the project returns to the company more than its costs.

Let’s give an example for this one of the important financial terms. If the project costs for $100,000 and if the company will have benefits that will have a value of $120,000, then the economic value added for this project will be $20,000.

EVA is the amount of added value the project produces for the company’s shareholders above the cost of the project. Note that, this added value might be either financial or intangible assets.

You can run a marketing campaign that will increase the brand awareness of your company. Although it might not directly bring revenue to the company, it might increase the brand value. Therefore, it will be considered as economic value added as well.

There might be several projects that an organization can initiate. But due to some project constraints such as budget, schedule, resource constraints etc. some projects are selected over another.

Let’s consider that there are 2 projects in your organization that the management is considering to initiate.

Sunk costs are not considered when deciding whether to continue a troubled project. Because that is the money that has been spent already.

For instance, the project might have spent $200,000 while it was planned to be spent $100,000 for the work that has been accomplished till now. This is a big variance. Senior management of the company might evaluate to terminate this project due to this cost variance. But when considering termination, $200,000 spent already might not be taken into account. Because it’s gone already. If the future works starting from now will bring benefits to the company, the project can be continued.

The most common way of increasing the productivity is increasing resources. For instance, two workers paint a house faster than one worker. Or, two machines can produce more products than one machine.

However, the law of diminishing returns proposes that after a certain point, adding more input or resources will not produce a proportional increase in productivity. The main reason of this might be due to extra coordination.

If two workers will paint the house, they need to do the work in a coordinated way. At some parts, they might intersect in same locations and this might affect their productivity.

Let’s go over an example to understand the law of diminishing returns better.

Working capital is one of the important financial terms, which is calculated by current assets minus current liabilities for an organization. This is used as the amount of money available to invest for a company. Assets include the liquid money, properties, shares, and any other investment instrument that can be used. Liabilities are actually debts of the company. These can be rental fees, payments to the suppliers, salaries that will be paid to the employees etc.

Another one of the financial terms is depreciation. Large assets, for example, equipment, vehicles purchased by a company, lose value over time. For instance, let’s think you bought a brand new car now. Will it have the same value after you use it for five years? Of course not. The value of the car will decrease during the time and this is called depreciation. This is an example of depreciation. In order to calculate the current assets of a company, depreciation is taken into account. Because, a tool, vehicle, equipment etc. that will be purchased now will not be able to be sold with the same value after some time.

There are two common models used for calculating depreciation:

Let’s see the two types of depreciation over an example. Let’s assume that your company purchased a bulldozer in order to use in construction projects. Purchasing amount is $300,000. This bulldozer will lose its value over time.