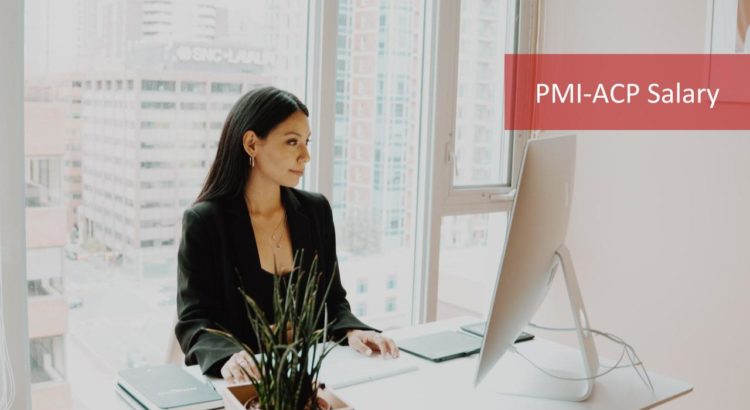 The average PMI-ACP salary in the United States is ~$120K. However, depending on the Agile role, salary varies:

In the headings below, we will go over these roles in detail.

What is the PMI-ACP certification?

Let’s talk about Agile first. In the past few decades, Agile was not very popular. The Agile practices were not known to many people and only a few industries were utilizing these practices at work. But now as the popularity of Agile has globally grown, an increasing number of people are taking interest in learning more about it.

The PMI-ACP certification has now become almost a mandatory requirement for many roles like team leads, project managers, and other senior roles. Especially, the professionals who are working in the IT industry are expected by the employers to hold this certification. These days, you will find your colleagues and friends mentioning this certification. Since this is a growing certification, people are taking more interest in finding out PMI-ACP benefits. They want to know how this certification can benefit them, what type of jobs it will land them on what is the PMI-ACP salary?

Considering what many people are looking for about PMI-ACP, we have created this post. Here we will mention the worth of earning this credential. Moreover, we will give you details about the PMI-ACP salary. We will also specifically talk about the different roles that a PMI-ACP takes at work and mention how much salary each role should expect to receive.

The Average PMI-ACP salary in the U.S.

PMI-ACP salary depends on many factors. The main factors are:

In the headings below, we will go over these roles in detail. You can read our PMI-ACP Study guide.

Here in this post, we have listed down the common roles that a PMI-ACP certified professional takes. We will explain what each role does and how much on average he earns.

Agile coaches have versatile responsibilities at work. They train the teams on the Agile methodologies. Without having a team that understands Agile, Agile practices cannot be utilized in work. Hence, they make sure the teams know the Agile practices well and to the extent that they can utilize these properly and effectively.

The Agile coaches guide their teams and they oversee their transition from the current working model to the model on which the Agile development is based. The training of the team continues throughout the project. The Agile coaches would also set ground rules and regulations for work and meetings. Regularly, they would audit the processes to detect failure and improve efficiency. They create and continuously improves the capacity calculators for the planning tasks. Ensuring there is a good level of engagement between stakeholders and their team is also their duty.

Other than these things, Agile coaches spend their typical day at work helping their teams on other many matters also. For example, they would help them in determining a solution and resolving a conflict. The Agile coach would show them how to do better retrospectives and standup meetings. Furthermore, they would help meet stakeholder expectations. To ensure this, they would help his teams to do better planning and execution of the work. They would also focus on continuous improvement and maintain discipline and rigor at their workplace.

Generally, Agile coaches are experienced professionals and take on a senior position in the organization. Talking about the PMI-ACP salary for the Agile coach, an average salary in the USA for this role is $127,000. It is quite a big figure salary!

A Product Owner has a variety of things to do at the office. They work with the customers to determine the product features required. During project planning, they would work with their team to define Product Road Maps, User Stories, and prioritize the backlog as necessary. They also make sure that their team understands the backlog and is not off track. During the project execution phase, they track the progress of the work and optimizes the value of the work. The Product Owner has the authority to approve the work. They even contribute to some technical activities. For example, they would develop a prototype, improve a technical feature of the product. Read more about PMI-ACP certification cost.

A Product Owner deals with a lot of people. They deal with their team, they deal with the customers, the sponsor, the executives, and other stakeholders. Hence, playing the roles of a conflict resolver, delegator, escalator, negotiator, communicator, etc. are also their responsibilities.

A Product Manager is the primary point of contact both for the customers and the organization. Their responsibilities are mostly for high-level tasks. They understand what the organization’s vision is and tries to align the projects with it. They listen to the customers and look after their needs by ensuring the deliverables are completed as per the priority or urgency requirement.

Product Managers spend their typical day defining the vision and strategy for the company’s services and products. They gather customer requirements and refine them for common understanding. They would also work with sales, marketing, support, and engineering teams to ensure revenue is being generated as expected.

So, unlike Product Owners who spend most of their time with their teams, working on User Stories, Road Maps, priorities, backlog, etc., the Product Manager caters to the needs of the organization and the customer, at a higher level.

What about the PMI-ACP salary for a Product Manager? Well an average salary in the USA for this role is $106,000. It is a good salary and the role also enjoys the advantage of being in a senior position in the organization.

An IT project manager is involved in the planning, execution, monitoring, and controlling IT projects. Their work objective is to deliver the projects within the agreed constraints, terms, and conditions. They plan the project quality, procurement, schedule, communications, etc. During the project execution phase, they would ensure that the project plan is being adhered to. They would then monitor the project progress and determine any variance. If the project is not going as planned, they would determine and execute necessary corrective or preventive actions. Closing the project formally by obtaining the customer’s acceptance is also their responsibility.

Being an IT project manager, they would also perform some tasks that are different than the tasks of a typical project manager. For example, they would utilize their technical understanding of hardware, software, security in the project planning and execution. They will be involved in technical problem diagnosis and solving. IT project managers are expected to have all-rounded skills. They are not required to possess in-depth knowledge of the technology though. However, they should be capable enough to give their valuable input in technical discussions, when needed.

In this post, we have mentioned PMI-ACP salary for the common Agile roles. You have learned now that an Agile practitioner can take many different roles including IT project manager, Agile Coach, Product Manager, and Product Owner. There are also a few other roles in the Agile world; in this post, we mentioned the most common ones. We also mentioned how much these roles earn on average in the United States.

In fact, outside the United States also, these roles earn handsome amount of salary. If we just look at an example of PMI-ACP salary for the Agile Coach, in Dubai, UAE, we will learn that it is around $90,000. This is quite a lot actually, considering the salary is free from any tax deduction.

Since the demand for PMI-ACPs has risen, the organizations have felt the scarcity of PMI-ACP certified professionals in the market. However, more and more people are now taking interest in Agile and perusing the Agile certifications, particularly the PMI-ACP certification. According to the statistics, today there are more than thirty thousand PMI-ACP credential holders worldwide and the number is going up fast.