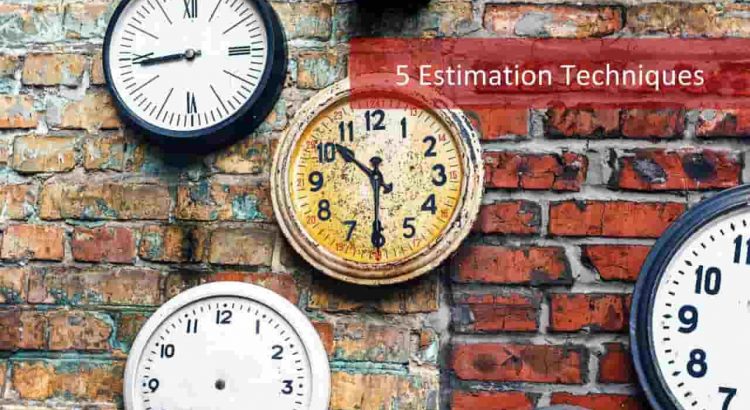 Choosing the Right Estimation Technique for Your Project

The first estimation technique is One-Point Estimate. In one-point estimate technique estimators submit one estimate per activity. Estimator goes through the activity description and details. Based on the information available, they provide an estimation to complete this activity. For instance, “4 days needed to complete installation”.

One-point estimates should be used for projects that do not require a detailed, highly probable schedule. This means, if a precise and accurate schedule is not a must in your project, you can use this estimation technique.

If you need a more detailed schedule in your project, one-point estimation technique can have negative effects on the project. These are:

So this estimation technique is not suitable for projects with precise and accurate schedules.

The result of the parametric estimation technique is the estimates based on measures like time to spend per line of code, linear meter or per installation.

For instance, let’s consider that you are managing a software project, in order to estimate the duration of project activities, time spent for writing a line of code is important. Based on this parameter, you can guess the duration of the other activities. Or, if you are managing a construction project, and if you know how long it takes to complete 1-foot square area to build, you can estimate the project activities duration with this parameter.

For instance, if you are managing a construction project and there will be 100 rooms that need to be painted, it is expected that painting 100th room will take less time than painting the 1st room. Because the workers will have more experience on the building and painting similar room. Or similarly, a software developer is expected to develop a similar screen in a shorter time in a software project.

For instance, Rule of thumb 80/20 states that 80% of the problems are caused by the 20% of the potential source of problems. By this way, you focus on that 20 % to fix the majority of the problems in an environment.

Let’s give some other examples of Heuristics estimation technique:

In a Software project, industry practices say that the design of the project will be 15% of the development work. This is not a rule of God for sure. There might be exceptional and extraordinary software projects that go beyond this ratio. For instance, if you are running a major infrastructure project in an IT company, it is expected that design work will be higher compared to a regular software project.

Similarly, the testing of a software project is estimated as 25% of the development work. And of course, this can vary depending on the software project dynamics. For instance, if you are testing a website on several smartphones and web browsers to check its responsiveness, this will take a long time in the project respectively.

The 2 approaches to the PERT estimation technique

After optimistic, most likely and pessimistic estimations for an activity are collected, there are 2 approaches in calculating PERT estimation technique.

What are activity standard deviation and activity variance?

It is better to provide activity standard deviation and activity variance definitions as well.

Since an estimation is provided for an activity during Estimate Activity Durations process, estimations can be given in a range instead of one exact estimation. And this range is given with the help of estimated activity duration and standard deviation.

For a well-defined and clear activity with no or very little risk, we expect to see pessimistic and optimistic estimates will be closer. Because, the activity is clear, there are no ambiguities and the estimator expects no high surprises during performing the activity.

Therefore, the higher activity ranges, standard deviations, and variances show the risk level of activities. If there are unclear points, so many ambiguities or risks with an activity, the estimator will consider all these when providing an estimate for the pessimistic value, and this will cause a higher standard deviation, variance, and activity range respectively.

Let’s go through a PERT Analysis or in other words, Three-Point Estimation Technique example.

Let’s assume that you are the project manager of a software project. You ask a software developer in your team about his estimation on the development of a specific screen. He gave the PERT estimates as follows:  “Most Likely, 7 days, Optimistic 5 days, and pessimistic 15 days”. After you get these estimates for an activity, estimated activity duration is calculated in next step.

So what is triangular and Beta distribution PERT estimates, standard deviation and activity range for the development of this screen? We will see in detail now.

Beta distribution was giving more weight to the most likely estimate by multiplying it with 4 during calculation. When we substitute the optimistic, most likely and pessimistic values of the activity, we find the beta distribution estimation as 8 days.

Standard deviation is found by dividing the difference of pessimistic and optimistic estimates to six. When we substitute the values in the equation, the result is 1.67 days.

One thought on “5 Alternatives for Choosing An Estimation Technique”